I had a look at the recent article by Millar et al. that has elicited comment in the press.

As far as I can tell, it looks at existing modelling and concludes that we have not yet passed the point of no return for limiting global warming to 1.5°. This is good news. If my reading of the article is correct, it is hard to reconcile with Rod Liddle’s article in today’s Sunday Times:

Last week we learnt from a study… in the impeccable and neutral source Nature Geoscience that we have all been taken for a ride by the climate change people… Billions were spent in this country alone, subsidising useless wind farms and taxing ordinary people on their energy bills.

Their Brussels shop, at the posh end of town, will close next weekend. It’s already shrinking away, though there are still plenty of potential customers. There’s no beer left in the food section.

I got a nice price on a petrol blue suit. 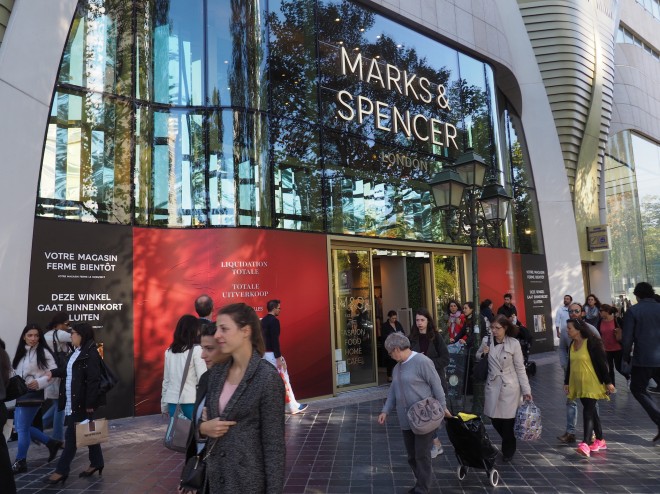 Colm Toibin came to talk at the Passa Porta international bookshop in Brussels city centre this evening. He told some jokes. His new book, House of Names, tells a classical Greek story, of Clytemnestra, Elektra and Orestes. He started it in New York when he couldn’t sleep at night: it was too warm in America: “I think that drives them into the state they’re in at the moment. They keep their central heating on at night.”

I’m still catching up on things I read over the summer. In the Times on 21 August Libby Purvis wrote:

Early specialisation leads to a lack of what Melvyn Bragg once described to me as basic “grids”. He explained that his brain has a good literary and historical grid, so whenever he learns a new thing in such areas it has somewhere to fit in. So it sticks. A new scientific fact, though, may not stick because there’s no slot. I can identify with that problem. A properly educated person need not know everything, but needs both grids: fission and feelings, Electra and electrons, emperors and enzymes.

Brilliant. I know what Purvis is talking about. I’ve thought about it in the past, but never managed to express what I was thinking at all precisely. This concept of grids and slots is a good start at doing so. (Someone who describes a thing well, like this, makes it possible for others to tamp a thought down and build other thoughts on top of it.)

I find it determinist, though, to think you can’t do anything about it in adulthood. When I come back from visiting a place I haven’t been before (like the Ionian islands this summer), I find myself following articles about it in the paper, noticing references to it in books. Quite often it becomes an addition to my grid.

(Slot machines on board the ferry Finn Maid, sailing from Lübeck to Helsinki in summer 2015, reflected in its window)

Last week, six of us refought the battle of Chaeronea (338 BC). In history it was the end of classical Greece. Their spear-armed hoplites (on the right in the first picture, the left in the second) were defeated by the sarissa-armed phalanxes of Philip II of Macedon, father of Alexander the Great.

In our battle Alexander was killed in the same rash cavalry charge that in reality swept away the Theban Sacred Band, on the Greeks’ right flank – with implications for the next bits of history! But the rest of the battle went the way of the records (and three of the four other refights I found on line). This makes sense. Sarissas are longer than spears, so the Macedonian phalanx can bring more ranks to bear when the two meet. The phalanxes need to go deep to take advantage of this. The hoplites could go wide and encircle them. But the width of this battlefield is limited by a river and a marsh on the Greek right flank, a town on the left, so the Greeks can’t take advantage of their extra width.

Both armies have a smattering of light troops to occupy the broken terrain on each flank. If we fight this battle again I would let the Greeks hold their light troops back behind their hoplite line. After the Macedonians deploy, they could rush them all to one flank and try and win an outflanking victory there.

Patrick Leigh Fermor has this to say:

“The end of Athens at the battle of Chaeronea used to be the signal for Greek scholars to put back their books with a Milton quotation and a sigh. It was closing time. They forgot that Philip’s dishonest victory opened another lustrous age across the water; of course, a more garish one, a shade second-rate and not to be mentioned in the same breath as the fled wonders. But when the victor’s son, with all the East at heel, had led the defeated Greeks to Bactria and the Indies, who could blame their descendants for a certain vainglory? Alexander had founded cities as others throw coins; the language was universal; marble acanthus leaves opened in thousands above the dunes. Letters, poetry, all the arts and all the pleasures throve in the half-Oriental afternoon of the Ptolemies and the Seleucids.”

I’m with the Greek scholars. But I would still like to see the relics of the Bactrian Greek kingdoms that survived for hundreds of years in Afghanistan.

On 6 August (I’m catching up with things that caught my eye over the summer) John Naughton wrote in the Observer,

It … seems incredible that in the 21st century we propel ourselves along using the energy provided by controlled explosions in metal cylinders. But the industrial fallout from switching to electric cars will be colossal. Some of the impact will be obvious and direct – for example on petrol stations, some of which will become charging stations, while many others will just wither and die. Because most car journeys are short, owners of electric cars will opt to recharge at home, something they cannot do with conventional vehicles. On the other hand, given that it takes significantly longer to recharge than to refuel, the switch may mean enhanced retail and catering opportunities for the stations that remain.

Then there are the innumerable second-order effects. Electric cars are much less complex than conventional cars. They require much less maintenance and the skills required to maintain them are different. They are also likely to last longer. They are much quieter and have zero emissions. On the other hand, a nation that recharges its car batteries at home will make different demands on the national grid…

I believe we need electric cars. The EU has said that it will cut its greenhouse gas emissions by 80-95% by 2050 compared to 199). Agriculture will certainly still emit greenhouse gases. Probably, industry will need some fossil fuel for high temperature heat. If transport is to use any fossil fuel by that date, it should go to heavy transport which is, apparently, harder to electrify (though there are interesting nautical projects in Norway). Therefore, electricity generation and buildings need to get their emissions more or less down to zero by 2050; and so does land passenger transport.

Given reluctances about biofuels, electric cars seem to be the best option.

That means it is interesting to think about the consequences.

John Naughton raises some of these. For myself, I am also interested in the effects of electric cars on our efforts to switch city transport away from cars altogether, to public transport, cycling and walking. We need to do this because these forms of transport are even better for the environment; and we need to do it because reducing car use makes our cities pleasanter places to live and economically stronger.

My current view is that electric cars won’t change the equation much. They have a high capital cost and a low running cost, so that once you’ve bought one it makes sense to use it all the time, unless congestion or city regulation get in the way – but the same is true of petrol and diesel cars, and in many cities public transport is gradually eroding cars’ market share even so.

It does worry me, though, that electric cars are being exempted from controls on car use in cities – such as the congestion charge in London. These controls have multiple purposes, not just reducing pollution. My instinct is that they should be kept in place in the electric car age.