Twenty years ago I heard a radio programme about Norilsk. I wrote about it in a song, Cold Places, for a band I was in:

In the town of Norilsk on the Arctic Circle
Frost breaks for one month in July
Fathers teach daughters swimming in the Ob’s cold waters
If they can do it why can’t I?

(The song also had a verse about the childcare practice of the Emperor Penguin.)

Norilsk is actually on the Yenisei but Yenisei didn’t scan. The part about children learning to swim in the river is true, though.

I haven’t been to Norilsk. This is a picture of the swimming place at Polotsk, on the Dvina in Belarus, in August 2015. 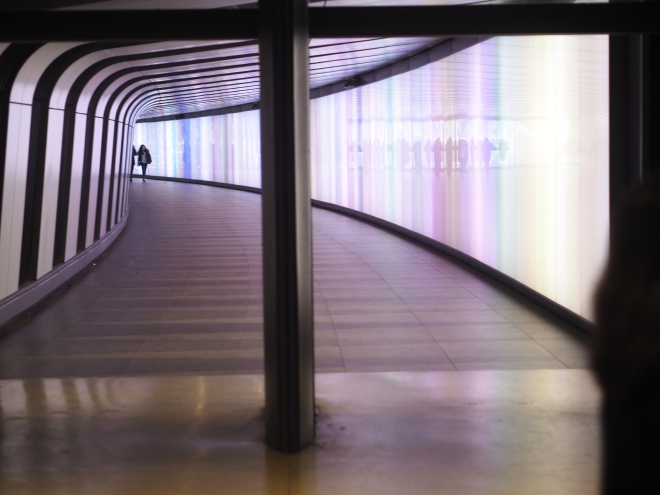 “[MacCruiskeen] took a little spear from a place he had on the shelf. ‘Put your hand out’, he said. I put it out idly enough and he held the spear at it. He kept putting it near me and nearer and when he had the bright point of it about half a foot away, I felt a prick and gave a short cry. There was a little bead of my red blood in the middle of my palm …

‘Why did your spear sting when the point was half a foot away from where it made me bleed?’ …

‘I will tell you because you are a confidential man,’ he said … ‘The point is seven inches long and it is so sharp and thin that you cannot see it with the old eye.’…

‘I suppose it is far thinner than a match?’, I asked.

‘There is a difference,’ he said. ‘Now the proper sharp part is so thin that nobody could see it no matter what light is on it or what eye is looking. About an inch from the end it is so sharp that sometimes – late at night or on a soft bad day especially – you cannot think of it or try to make it the subject of a little idea because you will hurt your box with the excruciation of it.’ …

‘It was sharp sure enough,’ I conceded, ‘it drew a little bulb of the red blood but I did not feel the pricking hardly at all. It must be very sharp to work like that.’

MacCruiskeen gave a laugh and sat down again at the table and started putting on his belt.

‘You have not got the whole gist of it at all,’ he smiled. ‘Because what gave you the prick and brought the blood was not the point at all; it was the place I am talking about that is a good inch from the reputed point of the article under our discussion.’

‘And what is this inch that is left?’, I asked. ‘What in heaven’s name would you call that?’

‘That is the real point,’ said MacCruiskeen, ‘but it is so thin that it could go into your hand and out the other extremity externally and you would not feel a bit of it and you would see nothing and hear nothing. It is so thin that maybe it does not exist at all and you could spend half an hour trying to think about it and you could put no thought around it in the end. The beginning part of the inch is thicker than the last part and is nearly there for a fact but I don’t think it is if it is my private opinion that you are trying to enlist.” – Flann O’Brien, The third policeman (1967)

“[T]he captain spread a sheet of music upon the table, and both illuminated it and prevented it from being carried away by placing a lantern on its upper edge. Solemnly he sat down and began to tap the [mandolin’s] striking plate with the plectrum.

The doctor raised his eyebrows in perplexity. This tapping seemed to go on for a very long time. Perhaps the captain was trying to establish a rhythm. Perhaps this was one of those minimalist pieces he had heard about, which was all squawks and squeaks and no melody, and perhaps this was the introduction. He looked at Pelagia, and she caught his glance and raised her hands in incomprehension. There was more tapping. The doctor peered at the captain’s face, which was rapt in deep concentration. The doctor always found that in incomprehensible artistic situations like this his backside inevitably began to itch. He shifted his seat, and then lost patience. ‘Excuse me, young man, but what on earth are you doing? This is not quite what my daughter led me to expect.’

‘Damn,’ exclaimed the captain, his concentration utterly destroyed, ‘I was just about to start playing.’

‘Well, about time too, I should think. What on earth were you doing? What is it? Some ghastly modern twaddle called “Two Tin Cans, a Carrot, and Dead Harlot?”‘

Corelli was offended, and spoke with a distant tone of lofty disdain, ‘I am playing one of Hummel’s Concertos for Mandolin. The first forty-five and a half bars are for the orchestra, allegro moderato e gracioso. You have to imagine the orchestra. Now I’ve got to begin all over again.’ – Louis de Bernières, Captain Corelli’s Mandolin (1994) 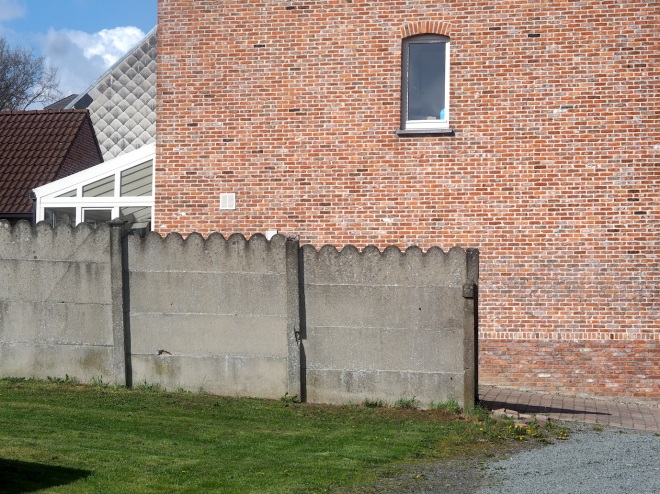 “Paris is sufficiently compact that you can cross it with ease, in a few hours, and it has no grid, forestalling monotony. It virtually demands that you walk its length and breadth; once you get started it’s hard to stop. As you stride along you are not merely a pedestrian in a city – you are a reader negotiating a vast text spanning centuries and the traces of a billion hands, and like a narrative it pulls you along, continually luring you with the mystery of the next corner.” (Luc Sante, The other Paris, 2015)

I remember an early morning when I crossed from gare du Nord to Montparnasse, as the shops were setting out their stalls, on foot.

That in turn makes me think of when my talented guitarist friend and I (a negligeable bassist) put up an advert for a singer and a drummer. A woman telephoned and explained about her sense of rhythm and willingness to invest in her equipment.

– Why are you telling me this? We’re looking for a singer.

-I want to be the drummer, of course.

Apart from my sexism – she was a great drummer, who sadly had to move to Alicante after a while – I like this because it I feel the same way about writing. My friends who write write fiction, mostly. I want to be a travel writer, of course. The job I would apply for – but I’m glad it isn’t vacant, and his last couple of books, on Africa and on the South, are as good as anything he has written – is being Paul Theroux.

I enjoyed myself, at the Gursky exhibition this morning, searching up and down all these rows of numbers. I could not find a 312 among them. What I’m going to count is this:

(look at the flight to Fuertaventura – ‘Fuerteventzra’ – on the right hand side). 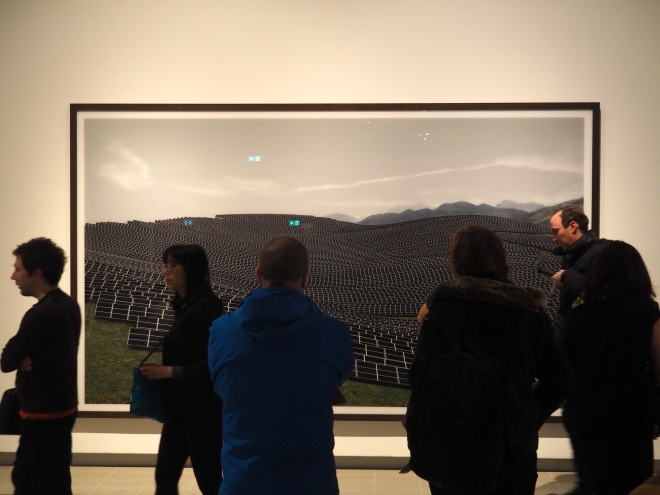 The Andreas Gursky exhibition in London, which I visited today, includes this lovely picture of PV panels on a hillside. It’s also used for the exhibition’s poster – chosen in preference to also-lovely pictures of an Amazon distribution centre, a Siemens factory and (my favourite) the Tour de France going up a mountain. Many of his pictures take the ordinary and make it not ordinary; does that mean that solar power has become ordinary, boring, everyday? What a good thing that would be. 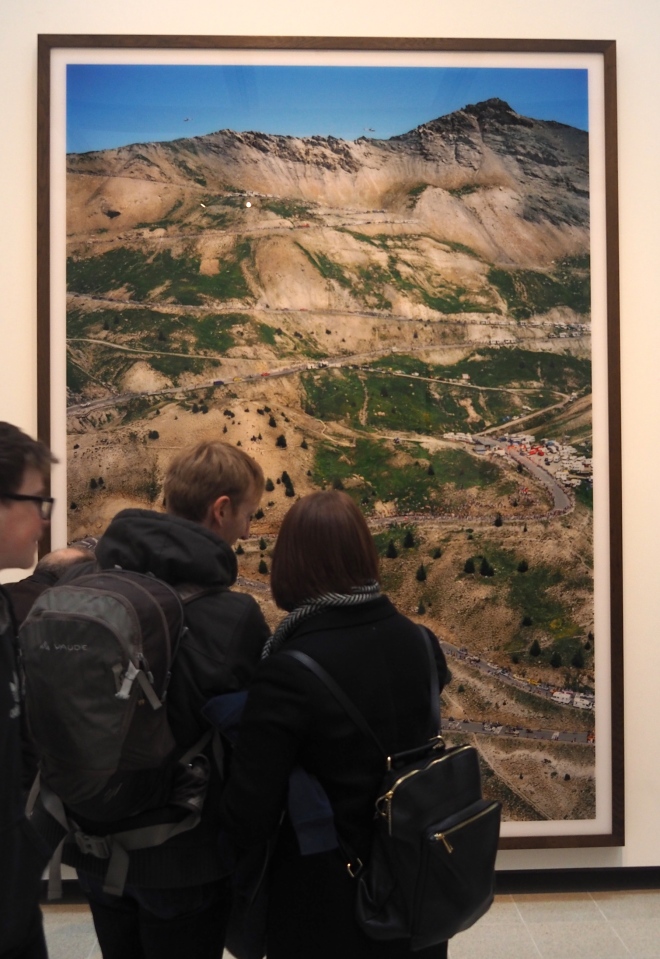 “Now at last it’s time for me to start writing this second book.

The manager of my line told me, You never put anything down except to be read. Every word ever written is written to be read and if some go unread that’s only chance, failure, they’re like grubs that die without changing. He said, You’ll keep three books.

So my first is a book of numbers. It’s lists and calculations and, for efficiency, I write it using ciphers. There’s a legend I never check any more, knowing all the signs now, the single-stroke shorthands that mean kilogram and tonne, widow, printer, generation, thief, the signs for currency, shipyard, doctor, for uncertainty, the holding sign that means there’s an unknown factor here to which I’ll come back. This first book’s for everyone, though almost no one wants it or would know how to read it.

The third of my three books is for me. You’ll keep one, is what he told me, for you alone to read, in which you should write secrets. But you’ll never be sure that no one else will read them: that’s the risk and that’s how the third book works.

When he gave me that warning he held his finger up as if he was counting to one.

He said, You’ll write it not because there’s no possibility it’ll be found but because it costs too much to not write it. If you ever find someone else’s third book, it’s up to you what you do. You could read it, but you don’t have to. Nothing you’d read would be for you. If I found one, he said, what I’d do is I’d set fire to it. I wouldn’t read it and I wouldn’t give it to you.

If I got back someone’s second book, well, I’d give you that, of course: the second book’s for readers, he said.” (This Census-taker, 2017)

I enjoyed typing this out.

I thought I’d end up dot-dot-dotting to select the phrases that related to the point I wanted to make – about diary writing. But it’s so allusive, so about things that are almost there. And so present, for example in the three times the speaker, the manager of the line, whatever that is, uses italics.

In the end the centre of this quote, for me, is still the idea of the private book that It costs to much to not write it.

I write a diary; who do I write it for?

(Writing is thinking. No thought is properly thought till you’ve tried to write it down. Often, then, I discover that my pretty thought has holes in it. Is that why I write a diary?)

I love this book, as much as his The city and the city.

(On diaries, if you haven’t already, read A life discarded by Alexander Masters.)

Now I’m thinking about that list of the things for which there are short-cuts in the census-taker’s first book.