When I was seventeen I went to Israel, to a kibbutz. It was the second half of the seventies but the sixties hadn’t ended. A big American called Mike, I think, with long red hair, played the guitar in the volunteer quarters in the evenings: early Joni Mitchell – Janis’ Mercedes Benz – the City of New Orleans – and Me and Bobby McGee.

I loved that song then. I love every line of it still.

– these lines are probably why, later, I took up the harmonica.  (Please don’t tell me a harpoon is a kazoo.)

It’s a road song and it’s full of place names. For us Europeans – and I can be sure I speak for an entire continent when I say this – the place names in American songs carry a spell.

At the same time, we have no idea where most of them are.

We know where New Orleans is, I believe. But we have no idea of where to look on the map for Salinas, where Janis Joplin lets Bobby slip away; or Saginaw, from where it takes Paul Simon, in America, four days to hitchhike; or the Genesco plant, where Nanci Griffith, in Never Mind, hopes to get taken on so she can stop following the harvests.

Until we started thinking of coming to California I didn’t even have any idea of the location of Santa Cruz, where we’ve just come for the next stage of our holiday.

(Speak for yourself, said our English friend J, who has been by chance in the same corner of California and came round for dinner. I’ve always known exactly where Santa Cruz is. That’s because you’re obsessed with Neil Young, said B, her partner. It turns out that Young has lived for many years on a ranch north of the city. An article by David Carr describes him as driving there “slowly but joyfully, as if the automobile were a recent invention” – https://www.nytimes.com/2012/09/23/magazine/neil-young-comes-clean.html.)

Anyway, now I know: Salinas is in central California, just down the road from Aptos. Worth coming to learn that alone.

These songs are travelling songs.

On the way back from the kibbutz I caught a boat from Haifa to Athens, hitched home from there to Manchester.

(It seems there are still hitchers in the US. I took this photo south of Santa Cruz. I wonder if he got a ride. 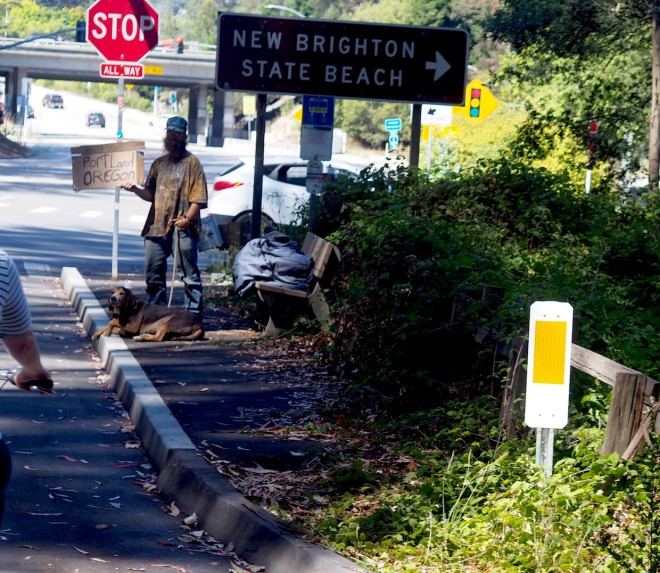 This is the Santa Cruz Branch Rail Line. It heads south along the bay, past Aptos, to Watsonville. I keep bumping over the tracks on my bike; but no trains are running. There’s a battle going on about whether the alignment should become a walking/cycling trail, a rail line, both or neither.

This poster, in Santa Cruz, is from the trail-only faction.

The flashpoint  is this stretch of the line, in Capitola, where we visited the beach a couple of days ago.

Engineers say the bridge can accommodate the trail or the train but not both. The tactic of the anti-train people is to try and pass, during the November elections, a Proposition stating that the trail may only traverse Capitola via this bridge. The train people are presently arguing that a Proposition cannot do this. I’ll have to follow the Santa Cruz Sentinel online to find out how it comes out.

The newspaper calls the bridge a trestle. That’s an American railway word which reminds me of Denis Johnson’s Train Dreams, describing the building of a line in Washington State a century ago:

“Grainier stood among the railroad gang and watched while the first locomotive crossed the 112-foot interval of air over the 60-foot-deep gorge, traveling on the bridge they’d made. Mr. Sears stood next to the machine, a single engine, and raised his four-shooter to signal the commencement. At the sound of the gun the engineer tripped the brake and hopped out of the contraption. and the men shouted it on as it trudged very slowly over the tracks and across the Moyea to the other side, where a second man waited to jump aboard and halt it before it ran out of track… Grainier’s experience on the Eleven-Mile Cutoff made him hungry to be around other such massive undertakings, where swarms of men did away with portions of the forest and assembled structures as big as anything going, knitting massive wooden trestles in the air of impassable chasms, always bigger, longer, deeper.”

I bet you find the word trestle in Marilynne Robinson’s Housekeeping, too, but I suppose I don’t have it to hand. (The Aptos house, where we’re going back on Monday, is gloriously full of books, so it’s hard to be sure.)

2 thoughts on “US3 – One day outside Salinas, lord, I let him slip away”

This site uses Akismet to reduce spam. Learn how your comment data is processed.