Brussels, where Emigrating Companion and I used to live, has better restaurants than anywhere else we know. People love to eat out. At parties people share restaurant recommendations. My fear about moving to Holland was that all this would be gone. It would be like Leukas in the Ionian islands, offering “bad Wine, bad Bread, and worse Cheese” (George Wheler, 1675).

Luckily, not. To our certain knowledge there are at least three good restaurants in Alkmaar (Fnidsen, 13 Balcken and Rue de la Plume). There’s at least one beach café at every beach, and while they aren’t posh they offer decent and varied food. I like uitsmijter (cheese, eggs and vegetables on bread or toast) – though it’s hard for your words to be understood when you order it. 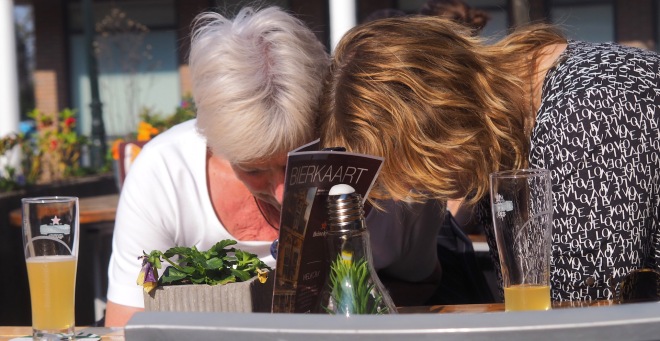 They may not go out as much in the week as they do in Brussels, but on Fridays and Saturdays the restaurants are all booked up.

Restaurants and cafés generally have pepper grinders. Oddly, though, they often need to be turned the “wrong” way (clockwise) in order to grind.

Apart from Gouda au cumin, Dutch cheese is not the cheese for me, but yesterday in a shop in the old town of Alkmaar I bought Belgian Herve and French Camembert.

On a hot day we went to an icecream shop. It only had one flavour of icecream (vanilla). It did have a lot of toppings.

At the coffee bar on Alkmaar station a range of drinks is available, including double espresso but not espresso. There’s more South African wine here and  less French than in Belgium. Except in our local pizza restaurant, you can’t get a quart or a demi – it’s either a glass or a bottle. There are quite a few local beers that are stronger and tastier than the general pils – but they seem to me less satisfyingly bitter than their Belgian equivalents. Gerardus Tripel is the beer I’ve liked most. I had one today in the beach café at Camperduin. (Companion, Dog and I went there on a Sunday trip on the bus. I ate a tuna salad sandwich and a delicious apple tart.)

This site uses Akismet to reduce spam. Learn how your comment data is processed.